This is a story that will be enjoyed by more than just those who love the game of cricket. The Second World War ended in 1945 and Europe faced many challenges. By 1949 England was still recovering and rebuilding their severely damaged country. It was the “Age of Austerity” where food and fuel supplies were still being rationed. There were strikes and life for the majority of people was not easy.

1949 was also a significant era and many changes were occurring throughout the world. The Geneva Convention was agreed, Apartheid began in South Africa, Harry Truman was President of the United States, The Peoples’ Republic of China was proclaimed by Mao Zedong, the Republic of Ireland withdrew from the British Commonwealth, the UN Security Council recommended membership for Israel, Siam renamed itself Thailand, and Donald Bradman, the world’s greatest batsman played his last first class innings, scoring 30.

The English public had now turned their attention to sport to get respite from their daily lives of labour and negativity. Previous New Zealand tours had been unsuccessful and lost money but now it was time for the New Zealanders to make an impression and earn respect and credibility as a cricket playing nation.

No other team in the history of New Zealand Cricket were known by the year in which they played. ‘The Forty-Niners’ were a special group of players, who developed a great team spirit and bond throughout the eight month tour. They played 32 first class games, winning 13, and drawing all four Test matches against England which was a significant achievement. They lost only one of the 37 games played.

This book was conceived in June 2014 and finally compiled and completed in 2017. I was having dinner with New Zealand radio commentator, Bryan Waddle in the West Indies in 2014. We were talking cricket and touring and how things have changed over the years. I happened to mention to Bryan that I had Dad’s original Diary of New Zealand’s 1949 tour of England. I said it was an amazing account of the tour on a day to day basis. Bryan said, “You should get the Diary published. There would be many people interested in reading about that tour which was a significant chapter in the history of our game.” 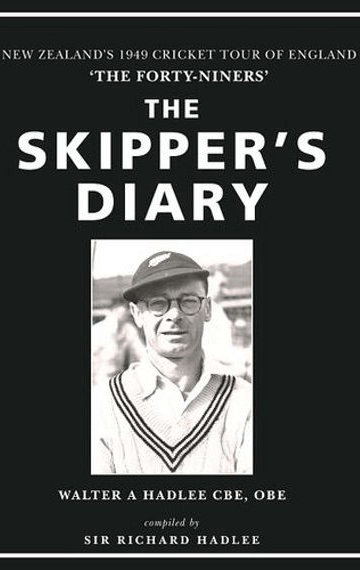