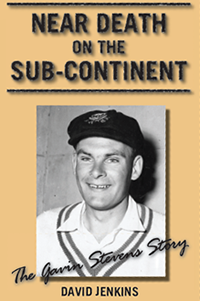 Gavin Stevens was a talented schoolboy cricketer who played ‘B’ Grade district cricket for Glenelg D.C.C. at the age of 14. Originally a fast bowler, Gavin developed into a powerful opening batsman. Very early in his career he forced his way into the South Australian state side. He struggled early to establish himself but time in England, following the early death of both parents, matured him and he returned a better player.

Success in his final two years of domestic first class cricket saw him selected in the Australian team for the inaugural full tour of Pakistan and India. His great joy soon became a nightmare as he joined the list of players who succumbed to serious illness. In Gavin’s case not only was his career threatened but so was his life. The tour changed him in several ways and he never played first-class cricket again.

The book titled ‘Near Death on the Sub-Continent – The Gavin Stevens Story’ is a wonderful tale. It looks at Steven’s early struggles and ends with a look at his business career that is truly remarkable. The story of Bradman and his thoughts on Test players, especially Stevens, is interesting. The book of 183 pages includes statistics of Stevens’ career and has some previously unpublished photos. With stiffened wrappers the book is a must for those interested in Australian tours to the sub-continent and South Australian cricket in the 1950s.

The author David Jenkins has previously written a small book on Ken Eastwood. A team mate of Stevens on their tour to Pakistan and India, Gordon Rorke has contributed an incisive foreword. Copies of the book signed by Gavin Stevens, Gordon Rorke and David Jenkins are available from The Cricket Publishing Company. Details are set out on the price list and can be ordered by emailing us or completing the online order form.