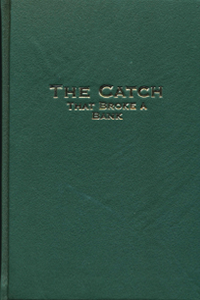 Catch that Broke a Bank

The story follows the line that W.G. Grace was in Australia with James Lillywhite’s 1873-74 English side, a match is played against South Australia – during which Crooks takes a catch. Without going into the full story, Crooks benefi ts from the catch, improves his station in life and then falls on hard times before retiring to Brighton, a suburb of Adelaide.

The title of the book, penned by Mallett, says it all. The previously unwritten story has been published by The Cricket Publishing Company in a limited edition of only fifty numbered copies with each copy signed by Ashley Mallett. The book printed on quality St. Cuthberts Mill paper in the Somerset series is bound in green leather with a gold inlaid title on the front. A protective sheet has been inserted on the signature page.