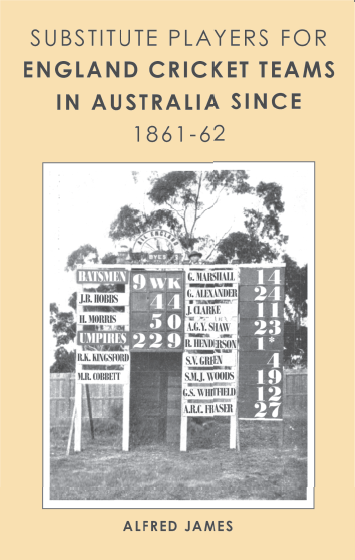 The Limited Edition has been signed by Angus Fraser and the author, is bound in half leather, with end bands, and has a marker ribbon along with coloured endpapers.

English teams have played very close to 500 first-class matches and 1000 second class matches (including One-Day International and T20 matches) in Australia since the first tour in 1861-62. The scorecards of these matches record quite a few players who made casual appearances, standing in for regular members of
the touring team who were absent because of injury or illness or who were taking a rest. Indeed, many of them were officials in the team or ‘camp-followers’ who were favoured with a ‘guernsey’ in an unimportant match.

This monograph attempts to list all the substitute players who have appeared for England in the scorecards of matches played on tours of Australia – that is, all players outside the selected touring party who have appeared in the batting lineup of a match or who have caught a player in the opposing team (none has effected a stumping).