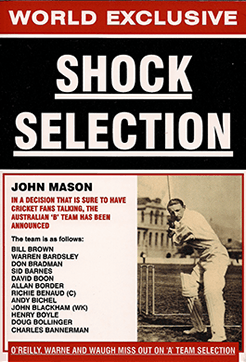 Since 1877, Australia has had in excess of 400 Test players. Some have only played a few Tests, and in fact a number have played only a solitary Test. Others have gone on to become some of the greatest players ever, not only in Australian, but world cricket.

This book is a unique compilation of Australia’s Test heroes. Each chapter names the best players, according to surname, for each letter of the alphabet – an A to Z of Australia’s best Test players.

For each Test played, selectors name their best players to make up a team for the upcoming Test match. This is a refl ection of in-form players at the current time, with an even balance of batsmen, bowlers and a specialist wicket-keeper and/or all-rounders.

For this book, our 428 Test players, spanning 130 years, were considered to make up the A-Z.

Obviously and uniquely, the alphabet has some letters more common than others. In this book some letters have managed to produce many quality players well in excess of a Test XII. For example, the ‘B’ team includes Benaud, Border, Boon and of course, Bradman. In this case, some of our fi nest players have unfortunately not made the cut. teams with statistics up to 30 June 2012.

Conversely, some letters (A, K and P for instance) have only produced just enough players to name a side. And some letters such as Q, U and X have not produced a solitary player at all. For those letters, a ‘Best of the Rest’ team has been named. For example Bill O’Reilly, who could quite conceivably be selected in Australia’s greatest ever Test team of all time, features in this ‘Best of the Rest’ side.

Each chapter has a unique summary of each player – more than just a run-down of runs and wickets, and features a stand-out player who brings his own uniqueness to Australian cricket history.

Be the first to review “Shock Selection” Cancel reply