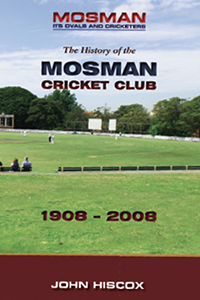 The Mosman Cricket Club celebrated its centenary in 2008. For one hundred years the club has sought to develop players and to play the game in a spirited manner. The reasons for writing a history are many and varied. In Mosman’s case it is to record the deeds of its players and supporters on the grounds and ovals within its boundaries over the last one hundred years.

Mosman has produced some wonderful players. Some have come to the area and then the club, whilst others have grown up there. Many players and identities have wonderful stories to tell. Amongst the players whom the club can hold up high as playing in the true Mosman spirit are Hal Hooker, Stan McCabe, Hammy Love, Ken Gulliver, Keith Carmody, Ian Craig, Gordon Rorke, Doug Ford, David Colley, Barry Knight, Allan Border and of recent years, Brett and Shane Lee. There are countless others who have made valued contributions as offi cials, scorers, managers, committeemen and supporters. In all, the club has stood for the good of the game.

The result is Mosman – Its Ovals and Cricketers – The History of the Mosman Cricket Club. All supporters of the club or those interested in the development and growth of a Sydney grade club will not want to miss out on purchasing a copy of the club’s history. Details on how to purchase a copy are set out below.

Be the first to review “Mosman Cricket Club” Cancel reply