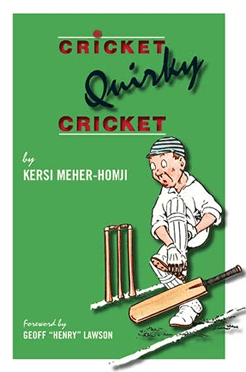 Cricket Quirky Cricket will amuse and intrigue. It’s a collection of hard-to- believe facts. There was a first-class cricketer from Fiji who had a surname of 44 letters. A Sri Lankan first-class cricketer had 10 initials before his surname. There have been county cricketers named Julius Caesar, William Shakespeare and George Bernard Shaw and a current Indian player named Napoleon Einstein. This is a limited edition of 200 signed, numbered copies, published to commemorate the 80th anniversary of the match.

A batsman unbeaten on 99 at stumps could not complete his century because he developed measles overnight. Many such nuggets colour the book. Former Australian fast bowler Geoff “Henry” Lawson has written a foreword to the bookrounders.

Be the first to review “Cricket Quirky Cricket” Cancel reply