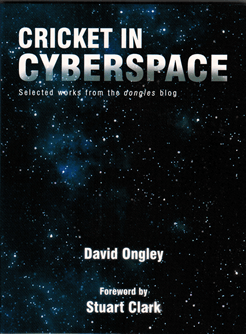 The book contains the selected works of David ‘Dongles’ Ongley taken from his blog. The material covered in the book is from the period 2002 to 2009. Included are topics such as ‘Controversy and Scandal’, ‘Obituaries’, ‘Mighty Deeds’, ‘Significant Events’ and a number of ‘Personal Profiles’. As ‘Dongles’ says in his introduction his interest in cricket has moved from newspapers to the cyberspace opportunity of recording the daily activities of cricket. “I did observe things in a unique way and could present a different perspective. Being self-published on the internet gives one freedom. I am happy to be irreverent, controversial and politically incorrect. I try to be original, thought-provoking and humorous wherever possible.” With illustrator Ric Burrell contributing original drawings of a ‘Dongles’ work the book is not only an interesting concept but a worthwhile addition to one’s bookshelf. In his foreword, former Australian fast bowler Stuart Clark says:

“for a guy that doesn’t like cricket books, I read the whole book that afternoon and on the train to work the next day. The stories, my recollection of the events that happened and the good times and bad that came with being a professional cricketer. I lived every young cricketer’s dream for about five years playing cricket for Australia and 15 years for New South Wales. Sometimes I forget just how good it was and how good I had it.”

Be the first to review “Cricket in Cyberspace” Cancel reply