FROM BRADMAN TO KOHLI

Currently, apart from the Ashes, no cricket series arouses as much interest as the Australia–India Test matches. Thrills and spills, conﬂicts and controversies colour Test series between these two great cricketing nations. The legendary cricketers Allan Border and Sunil Gavaskar have provided perceptive Forewords.
Kersi Meher-Homji takes you on an enthralling journey from Don Bradman in 1947 to Virat Kohli in 2018 via the Chappell brothers, Steve Waugh, Vinoo Mankad and Sachin Tendulkar and features all the legends in between. This entertaining book puts together the highs and lows, the dramas and traumas, heart-stopping moments, especially the tied Chennai Test of 1986, the topsy-turvy Kolkata Test of 2001, the thrilling Adelaide Test two years later and controversies ranging from the Mankad incident in 1947 to the Monkeygate Bollyline confrontation in 2009.

This is Kersi’s 15th book on cricket following his Six Appeal, Cricket’s Great All-rounders, Cricket Conﬂicts and Controversies, Famous Cricketing Families, Out for a Duck and the best-seller The Waugh Twins.

In this fascinating book Kersi describes in detail all 25 Test series between these two nations. With few exceptions both the teams roar like lions at home but lose tamely when away. Although India currently holds the Border–Gavaskar Trophy, having defeated Australia in India in 2017, they have failed to win a single Test series in Australia.

The book is rich in anecdotes, detailed statistics and interesting snippets. It selects the best Australian XI against India and the best Indian XI against Australia based on statistics and class. Anecdotes include Indian batsman Abbas Ali Baig kissed on the lips by a young girl on the pitch when he completed his ﬁfty in the Mumbai Test, how Norm O’Neill was jinxed by an Indian fan and how Bradman Don almost met Don Bradman.

Each book will be signed by the author and can be purchased using the order form below for $45.00 (including GST), postage is an additional $10.00. 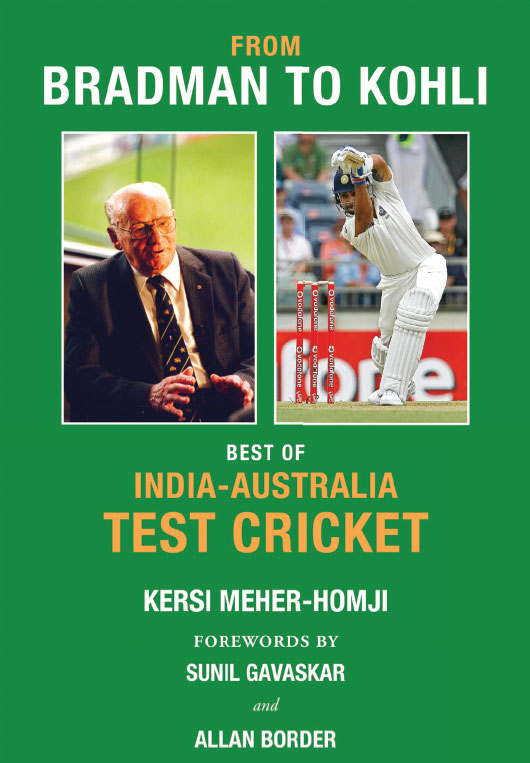