THE STORY OF SYDNEY GORDON SMITH

Only one cricketer could ever rightfully hang in their wardrobe the blazers of West Indies, MCC and New Zealand. No other cricketer can claim appearances for three countries. This extraordinary cricketing feat – largely consigned to a distant past – has now been brought to life by author Bill Francis. After meticulous research, with the motivation to give a special cricketer long overdue recognition, Sydney Gordon Smith, in rounded form, is fi nally revealed.

A ‘mystery man’ of cricket Sydney Smith may have been, but any close examination of his record (10,000 runs and 900 wickets) confi rms why he was ranked as one of the world’s best all-rounders of his time.
The current New Zealand cricket career bowling record has Richard Hadlee as the country’s leading wicket-taker, Clarrie Grimmet as the second highest and in the third place Sydney Smith. And then in checking the batting records, astoundingly, this same Sydney Smith is in the top 20 run scorers.

In this illuminating new biography author Bill Francis reveals that not only did Sydney Smith captain New Zealand, but prior to arrival in New Zealand, he played for both the West Indies and the MCC. Sydney Smith may have been the only cricketer ever to represent, in essence, three countries.

Why did Sydney Smith depart to England after playing for the West Indies, his birthplace, and then why did he suddenly disappear from England to New Zealand? Most of these events happened in the fi rst quarter of the 20th century but after some forensic research Bill Francis has pieced together the intriguing life of Sydney Smith, both on and off the fi eld.

Sydney Smith was a close friend of another New Zealand captain, Nessie Snedden, and in the book the connection is maintained with Nessie’s grandson, Martin, contributing the foreword.

The book is available from The Cricket Publishing Company for $33.00 plus $10.00 postage. 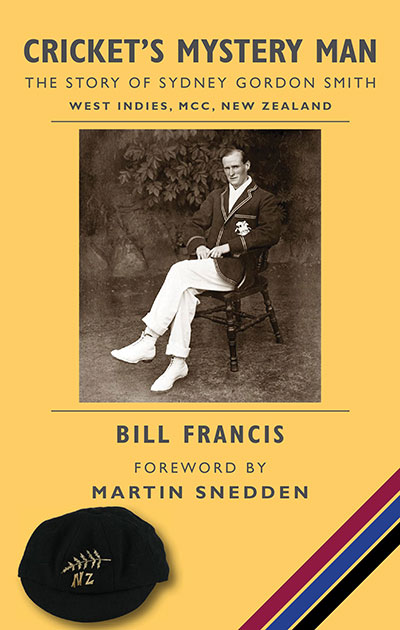 Cricket’s Mystery Man – The Story of Sydney Gordon Smith, is part of Bill Francis’ biographical journey covering New Zealand cricketers.
In 2019, he wrote Second Only to Bradman – The Life of Stewie Dempster, following on from earlier works on other prominent Kiwis Tom Lowry, Sydney Smith, Barry Sinclair and Bevan Congdon. Further biographies on Sir John Graham and Peter Montgomery have won wide acclaim.
Bill Francis has an extensive background in broadcasting and is currently a Director of Radio New Zealand. He lives in Auckland with his wife Mary, has three married children and seven grandsons.