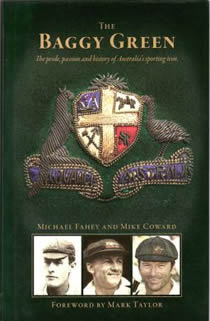 The Baggy Green The pride, passion and history of Australia’s sporting icon by Michael Fahey and Mike Coward Foreword by Mark Taylor

The book charts the evolution with reflections from many past and present Test players of the ‘Australian Baggy Green Cricket Cap’. The argument is given that by the turn of the 21st century the cap  had become a national icon – a symbol of Australian sporting excellence and a highly sought after item of memorabilia. Details of the sale prices achieved when the cap has been sold around the world are also given. As Mark Taylor notes it ‘is a powerful and timeless symbol which connects Victor Trumper to Ricky Ponting’