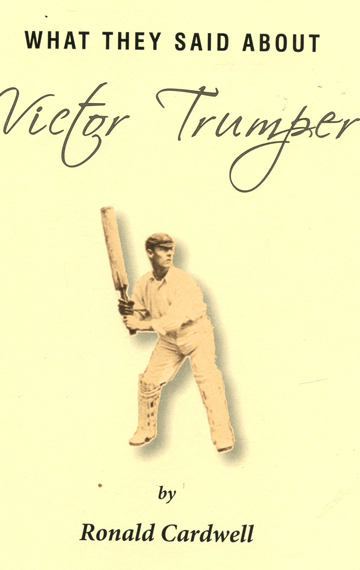 Victor Trumper was in many ways unique. He was, as Gideon Haigh recently noted, a ‘genius’. He was the first Australian batsman who drew the public to him by his style and the way he played cricket. Many people have written about Trumper over the years. Some well, others not as well. What has been consistent over the years however is What they said about Trumper. Players, writers, journalists and poets have all had something to say about him. Ray Robinson, the highly-regarded writer, once said of Trumper: “To those who insist on asking who the greatest batsman, Trumper or Bradman, was I feel the only fitting answer is another question: Which was the finer mariner, Sinbad the sailor or Popeye the Sailorman?”

This new monograph, What they said about Victor Trumper, contains a brief essay from the author and a foreword by Rodney Cavalier. There are 28 comments about Trumper by a variety of people together with two magnificent images of the stylish Australian batsman. The monograph has been produced in a limited number of 89 copies, the number of Test innings played by Trumper and is signed by the author and Rodney Cavalier.